Recently a letter signed by 202 legislators was sent to the White House, essentially ordering an investigation on how expensive travel nurses have become. Although this might sound alarming, the most important thing you need to know is there isn’t specifically a pay cap coming.

Let’s start from the beginning…

While COVID was running rampant throughout the country and our day to day lives were being shut down, nurses’ lives went from what was considered normal at the time, into overdrive. On the year that was supposed to be hailed The Year of the Nurse and the Midwife, the celebration took a backseat to the pandemic. ICU units were being so heavily strained by the amounts of those ill with the Delta Variant that specialized COVID units were being set up outside of hospital space to take on the demand. With travel nurses usually being hired in times where there is an increase in patients, generally, during seasonal times or when mandatory staff-to-patient ratios need to be fulfilled, they were once again being sought out. Yet, this time more rigorously.

Travel nurses started to go to the places that needed the most help and this help turned pretty urgent pretty quickly. Experienced ICU and travel nurses were being offered upwards of $5,000 per week which is a considerable increase from its usual $1,800 per week recorded in 2019. The hours became grueling, protective equipment wasn’t always readily available and with nurses and doctors becoming sick themselves, travel nurses were an investment many hospitals needed to partake in.

Three years later, our lives have taken dramatic up and down shifts coming in and out of lockdowns or sickness. Nurses, on the other hand, have been on the continuous uphill battle that seems to not be coming down anytime soon. Along with the continuous increase in pay for travel nurses to help out hospitals, more seem to be needed with a lot of nurses suffering from sickness or burnout. So with this, nurses were promptly seeing that pay increase in such a rough time was a huge positive. Resigning their regular nursing jobs to take on travel nursing allowed them to protect their mental and physical health while being paid what they deemed appropriate.

What did this all mean?

Hospitals are now needing to pay, which we believe nurses should be paid, in order to have an adequate amount of help in hospitals. Something that some are not so happy about. According to POLITIFACT, a fact-checking website, “There’s no evidence that these lawmakers are advocating a cap on nursing pay. But a group of lawmakers did ask federal officials to inspect the way staffing agencies charge healthcare facilities. And some states are considering capping what staffing agencies charge hospitals, which one industry expert said could lead to reductions in nursing pay.” They go on to state that there was “disinformation about the letter, saying that he (Morgan Griffith, a Republican from Virginia) has not introduced legislation to cap nurses’ pay, nor would he support any.” No response from the White House has been given and ”only Massachusetts and Minnesota have state caps on what staffing agencies can charge.” Even the idea of an investigation or federal legislation occurring seems low, stated by Toby Malara, the vice president of government relations for the American Staffing Association.

Despite the slight pieces of misinformation here and there, nurses have been standing up and discussing their personal points of view on the whole situation. Nancy Lund, a retired nurse from Massachusetts, wrote an open letter titled Letter to the editor: Traveling Nurses Deserve What They Earn which you can read here. As well as Nurse Katherine, a YouTuber nurse with 12 thousand subscribers, breaks down said letter to the White House and discusses her point of view which you can view here.

Nurses are prepared to fight for their rights to be paid according to the supply and demand currently in place. Which many other companies and organizations have equally obliged in throughout the pandemic. Nurses are not merely pointing out the unfairness to the possibility of the situation, but are commenting on even more nursing shortages if a pay cap were to happen, and some even suggesting a strike if need be. Essentially, putting the whole nursing industry as well as healthcare in a tough and crucial position.

While nurses, of course, should be receiving a fair wage for their incredibly demanding and grueling jobs. There is a reason travel nurses are paid more. FEE Stories (the Foundation for Economic Education), an educational foundation, gives a great example by stating “the higher wage incentivizes them to leave their families and their homes to live in unfamiliar locations for extended periods of time. The higher pay ensures that demand is met when the need is urgent. Leaving family and travelling for long periods of time reflects the fact that travelling nurses experience high opportunity costs. So, in order to incentivize nurses to supply more, they must be compensated with higher wages to make up for large opportunity costs. Economists call this the law of supply.”

So what does the future hold?

At this point, everything is business as usual. You could jump onto the travel nursing bandwagon, head off to various parts of the country to work in hospitals that need your help and make a great income at the same time. For those wanting an investigation into travel nursing agencies, they could be looking at a little beef with nurses if it occurs. At this point, battling with those who are literally saving lives every second of every day, is not something that nurses are ready to bow down to.

As one nurse stated, “There are some professions you can play with, nursing is not one of them!”

If travel nursing has been in your sights and you’d like to know a little more about how it works or what you can do to follow in the footsteps of thousands of other nurses around the country, then click here! 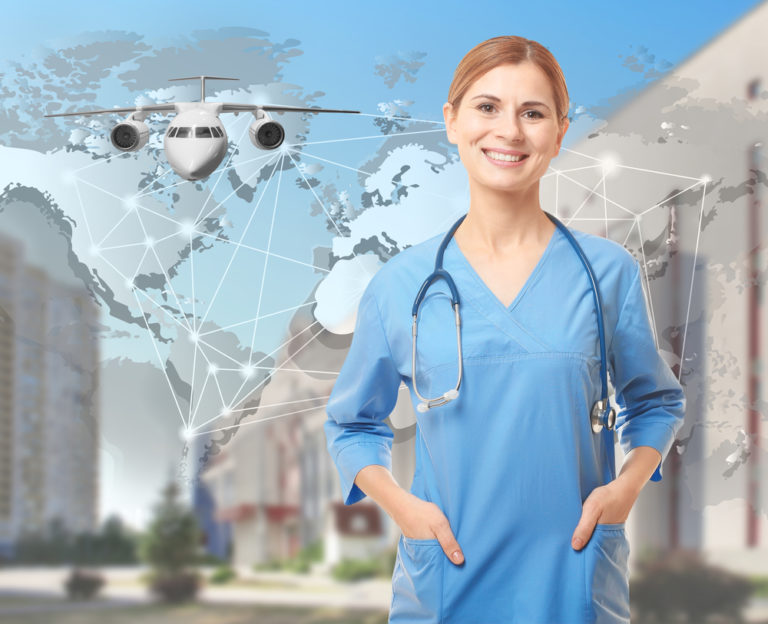 Entering a hospital can be a scary scenario for many of us. While we are unsure of what is going on or unsure of what the outcome will be, it is the hospital’s nurses and doctors we need to put our complete trust in.